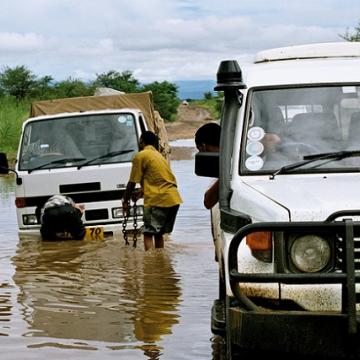 FATHUM is a multi-institutional, interdisciplinary project led by the University of Reading. The diverse team of FATHUM researchers links together research on forecast predictability and skill, complex drivers of risk, multi-actor perspectives on successful implementation and financing mechanisms to catalyse and facilitate the scale-up of Forecast-based Financing (FbF) for effective, appropriate and impactful action before a disaster. FATHUM researchers use the lens of pilot projects in highly flood-prone districts in Uganda, South Africa and Mozambique, to provide new scientific and social scientific knowledge. FbF uses forecasts of natural hazards to initiate humanitarian preparedness actions. An initial multimillion investment has led to 15 multi-hazard FbF pilot projects worldwide, implemented by the World Food Programme and Red Cross / Red Crescent Societies. These projects focus on initiating forecast-based actions on the ground and do not have capacity, expertise or resource to grapple with the wider challenges that currently hinder the success of FbF including understanding flood predictability and action governance.

At InSIS, we carry out social science research that seeks to understand multi-stakeholder perceptions and barriers to success. As many other social scientist have demonstrated (e.g. Rayner et al. 2005), major challenges that exist in the uptake of scientific weather forecasts are not just epistemological (relating to the forecast quality or skill) but inhere in complex institutional mandates and organisational practices. This means that different organisations might define a successful use differently, as the uptake and acceptance of forecasts depends on how they can be incorporated into existing structures and routines. In addition to exploring the barriers to success, we look at the ways in which forecasting models shape the politics and practice of humanitarianism itself.

An example of our research impact and policy engagement

The birth of the anticipatory agenda in humanitarianism and Disaster Risk Reduction (DRR) has led to the emergence of a new vocabulary around early/ anticipatory action. This prompted The United Nations Office for the Coordination of Humanitarian Affairs (UN OCHA), The Red Cross Climate Centre and the Centre for Disaster Protection to commission our team to develop a thesaurus “Acting ahead of Crises” to document and better coordinate the different terminology used across the array of development and humanitarian actors.

FATHUM involvement in forecasting, early-response and communication during cyclones Idai & Kenneth in Mozambique, 2019

Cyclone Idai made landfall in Mozambique on 15 March 2019, and was one of the worst storms ever recorded in the Southern Hemisphere, both in terms of number of people affected (more than 2.5 million) and fatalities, according to UN estimates. Our team of scientists and partners have worked in the early-response phase of the event, and FATHUM members in Mozambique have participated in operations on the ground with the Mozambique Red Cross Society (CVM), including implementation of rescuing and relief activities.

As for the flood forecast activities, the FATHUM team from the University of Reading have worked with DfID (UK’s Department for International Development), the European Centre for Medium-Range Weather Forecasts (ECMWF) and the University of Bristol to provide humanitarians with regular updates on the flood hazard extent and population exposed in the immediate aftermath of Cyclone Idai, based on the Global Flood Awareness System(GloFAS) forecasts. DfID used this information to coordinate their response with humanitarian partners on the ground, who were able to plan where/when access could improve, where/when the situation could worsen and prioritise their resources. As PI Liz Stephens writes: ‘These forecast-based and early-response actions are only one part of the humanitarian mechanisms that need to be considered to build resilience to such large-scale catastrophic events.’

FATHUM is part of SHEAR (embed link: http://shear.org.uk/) - Science for Humanitarian Emergencies and Resilience - and funded by DfID/ NERC.